Except for a moment of panic, my snow dyeing experiment is underway! After waiting for ages for enough snow to do this, when I went to start I found that I had no urea.  I did think of peeing into the mixture, which my friend Emily suggested.  You do wear gloves after all, but then after some advice from a friend (thanks Kathy) I decided I probably didn't need it for this application and moved ahead with my plans urine free.

I had no urea because someone I know was trying to be helpful one day and used a gallon of mixed urea to water my tomoato plants and basil.....ugh!  I couldn't imagine why my plants had suddenly shrivelled up and turned brown!  Then when I went to look fo my urea, I deduced enough to inquire further to see what happened....mmmm hmmmm!  Now, mind you, I had drawn a skull and crossbone on it but we didn't know each other very well at that time.  His sight is not what it should be.  I better go and mark my soda ash water with neon markers!  I'll be ordering some more asap, but Pro Chem is on vacation right now.

We'll find out tomorrow how it looks, but this is what it looks like right now in my garage fabric all scrunched up with snow piled over it and dye squirted all over in 3 colors on the left, deep yellow, Chinese red and cerulean blue.  On the right are 2 colors, yellow and blue. 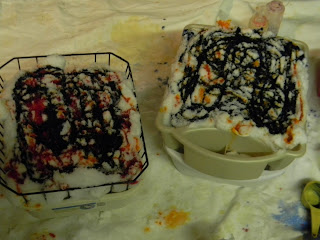 ﻿
I used a couple of old dish pans that are dedicated to dyeing and a couple of dish racks that are now also dedicated to this art form to allow the dye to penetrate the fabric and drip through without pooling on the bottom of the pan with my fabric in it.  It should sit for at least 3 hours...I'll watch it to determine when to take it out.

I consulted primarily with 3 good tutes on these sites:

Tis' the season of giving so I'll share the second quilt I made for a Christmas gift this year - this one's for Andy, one of my oldest friends, ex-husband and still a friend. I gave the Sissix Big Shot tumbler die cut a shot to cut out the shapes for this baby. 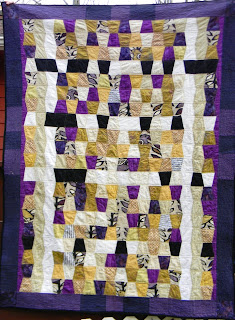 I've named it "The Bird" because he's a jazz afficiano, a guitar and sax player...guess who his favorite musician is. 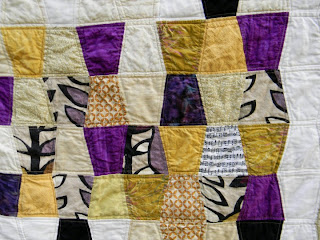 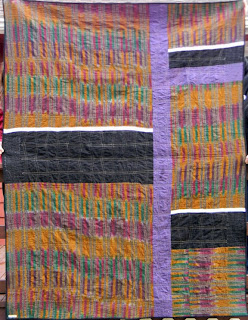 For those of you who do artwork, you know there's a lot of tedious work to be done besides the exciting stuff.  This may be especially so for quiltmakers...it is certainly so for me.  And frustrating times in the process as well.

First off, after almost finishing the piecing,  I took my machine down to the store where I purchased it to have them look at it because I was having a problem.  The presser foot was not holding onto the fabric as I was stitching it.  I'm trying to complete this piece for Christmas, so I really didn't want to surrender my machine if I didn't need to.   Since I was midway on this project, the person who was working there suggested that I use a walking foot to proceed until I could bring it back in for repair. Indeed that seemed to work, although I was really and truly struggling with this monster in my little machine to the point where I've  stopped a number of times to apply Capzasin cream to my hands that hurt so much I had to give them a rest.

I've been at it all week - laying in the quilting on a good sized quilt on my little machine can be a major feat!  About three quarters of the way through it my walking foot broke.  Just broke off while I was sewing!  Grrrr!  I also noticed that the first line (the entire row of stitching from top to bottom, over which I had already stitched umteen times in the other direction already, was a very bad stitch that had to be ripped out. You can't see the bottom of your work while you're stitching on the top.  And once the whole quilt is adequately stuffed in there, you don't pull it out to look at the underside unless you have some inkling that something is wrong.  I had no idea that it was a mess on the underside.  I did see that the stitch was too small so I lengthened the stitch for the next rows and most of them were just fine - whew! So, I'm now slowly and tediously ripping out the bad row of stitching one by one! 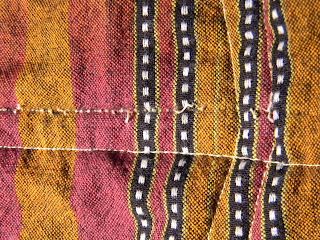 And what next, you say?  The tip broke off of my good seam ripper as I was working!  See how long the tip on the blue one is?  See how small the tip is now on the red one?  Ah huh! 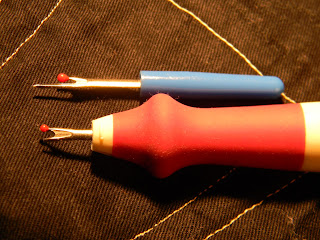