This winter scene is still heavily in progress, shifting and expanding and taking on new shapes.  It's quite a stretch on the learning curve for me but it feels more like an extension of previously, though fairly recent, developed skills rather than something completely new. The heavy thread painting is something I've never done to this extent but it does feel like I'm "painting" with thread.

The foreground shapes are not in their permanent positions yet and a border around it is in progress. 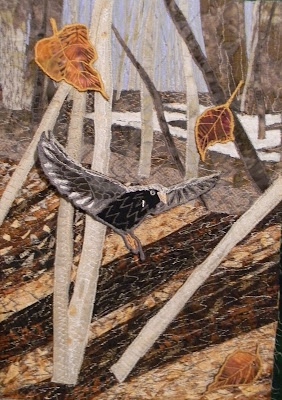 Hands in Many Pots!

My hands have been in a number of different projects, some completely new, others experimental.  Nothing quite finished.  Here's a peek:

The first of the Quilts For Boston
from the Boston Modern Quilt Guild
were delivered to the Watertown Police Force.
See here.

Email ThisBlogThis!Share to TwitterShare to FacebookShare to Pinterest
Labels: BMQG, quilts for boston

Last Thursday I got to see half of the World Quilt Show, New England XI.  I wished I had been able to see the whole thing but I was simply too tired to drive to Manchester for a second day.  But alas -  I'm happy I took in half of it in!

Today, I'm off on another quilt sojourn to The World Quilt Show - New England XI in Manchester, NH.  I'll be taking a class by Marjan Kluepfel called Zen and the Art of Free Form Fiberscapes.

Meanwhile, here's another link to more fun events at the 2013 LQF:  The Whistler Museum

The LQF extends from the main auditorium to various galleries throughout the city of Lowell.  The Brush Gallery is one of the most exciting ! This year's exhibit there was an up-close in-your-face delight!

Among the highlights of this exhibit were three SAQA members:

The SAQA Exhibit,  3 Cohesive Pieces , was designed so that those of us who have never shown our work before have the chance to do so.  You'll see a range of talent, though, ranging from brand new to very experienced - it's an exciting piece of work owing to Valerie Poitier and Michele David, our Regional co-reps and curators of this exhibit. 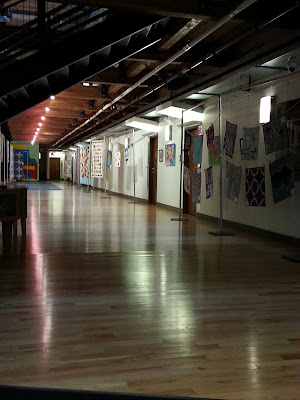 Here's a link to all of the quilts exhibited at the Appleton Mills Gallery , Lowell Quilt Festival
by members of the Boston Modern Quilt Guild.  Enjoy!
Posted by Janis Doucette at 8/11/2013 09:58:00 AM 5 comments:

It has been a busy 2 days at the Lowell Quilt Festival – one more to go! I’ll start out by showing some of the Boston Modern Quilt Guild “Red Nails” Challenge, so named for its colorway to coordinate with very red fingernails.  And some of the exhibit space pics of Appleton Mills..

I just received my first smartphone which I chose because it has such a great camera, but I am just learning how to use it.  Among other things, I had a hard time keeping my fingers out of the way so some of my pics need to be retaken.  But here are some close ups that came out pretty good.  I'll retake some and add them later.
It's a really good show!  We had a lot of positive chatter from viewers all day yesterday!